Established in 1959, we are the nation’s oldest and a highly respected professional agricultural agency known for good business ethics, honesty, and integrity. Our company is an individually owned business having affiliation with over 500 of the leading agencies and 1600 recruiters nationally and internationally. We are engaged in the business of bringing qualified applicants and employers together at a time of mutual need to negotiate a mutually satisfactory employer-employee relationship.

Hansen Agri-PLACEMENT has been a member of National Personnel Associates, the world’s largest cooperative association of Independent Recruiters, since 1966. We provide professional placement in all areas of agri-business and production agriculture, with divisions specializing in:

We have also positioned ourselves with international firms allowing us to serve clients on five continents—North and South America, Europe, Asia, and Australia.
Hansen Agri-PLACEMENT has alliances with trading partners and consultants in Spain, Central and South America, Mexico, and the Caribbean, enabling us to do business throughout the Spanish-speaking world. We also enjoy close working relationships with the leading placement firms in Canada and the United Kingdom.

If you are an experienced candidate who is looking to advance or an employer who needs qualified employees, we can help. We appreciate the confidence you have shown us in the past. Our goal is to provide both you, the applicant, and you, the employer, with a successful, long-term working relationship.

Please feel free to browse through our website and contact us if you have any questions. All inquiries are kept confidential. All positions are updated daily.

>> What We Do With Your Resume

On December 18, 2015, the Hansen Agri-PLACEMENT family lost a leader, mentor and friend with the passing of company founder, Jack Hansen, Sr.

Jack’s impressive career spanned many decades, and his accomplishments speak for themselves. In his nearly 57 years at the helm of Hansen Agri-PLACEMENT, he sowed the seeds of hard work, integrity and entrepreneurship that enabled Hansen Agri-PLACEMENT to flourish and grow into a strong and dynamic global business.

Yet Jack is remembered not just for his professional legacy. He was also widely regarded as a mentor and a friend whose empathy and warmth touched everyone he met. Many of the people he worked with over the years became dear friends.

His vision and leadership have left an indelible imprint on the lives of many people. Jack never wavered in his passion and determination to build his business and spread the word of God. Though his presence is irreplaceable, we rejoice in the knowledge that he now enjoys every day in his Heavenly home. 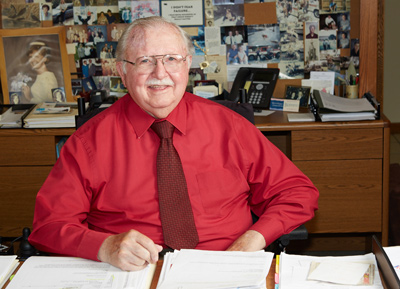 Jack Hansen, founder of Hansen Agri-PLACEMENT, was raised on a ranch in the western Nebraska sand hills. Jack’s passion for agriculture and ag producers was kindled as a young boy working in his father’s creamery. Jack’s job was to take the butter fat content when the farmers brought in their cream and pay them accordingly.

Jack served in the Navy from 1952 to 1957 as an aerial photographer, flying from the deck of the aircraft carrier U.S.S. Hancock off the coast of Korea during the Korean War. After returning from the service, he graduated from the University of Nebraska with a bachelor’s degree in business administration.

Hansen Agri-PLACEMENT was established on September 1, 1959. From the start, Jack built the business on the foundation of good business ethics, honesty, and integrity—principles that continue to guide the company today.

Through both the prosperous and the challenging years, Hansen Agri-PLACEMENT has made it their mission to consistently provide high-quality candidates for some of the leading employers in the ag industry. Jack felt there was always “one more question” that could be asked to find the ideal fit for both candidate and company. We still strive to ask that question today.

As a result, we have many candidates who return to us to help them take the next step in their career and employers who come back to us to help them with their hiring needs—the highest compliment that can be paid in our profession.